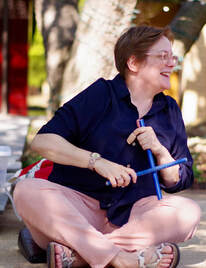 Donna Davis has been teaching the Suzuki method for over 27 years. After taking her first Suzuki workshop while still an undergraduate,she began her teaching career in Connecticut working with Diana Tillson, one of the pioneers of the Suzuki method in America. The founding cello teacher of the Bethwood Suzuki School in Woodbridge, CT, she taught for 3 years before moving to Erie, PA. Teaching at Mercyhurst College, Donna established the cello program and an extensive early childhood music program. Donna has been a certified Music Together teacher for over 15 years. She maintained a private studio in San Antonio before moving to Plano 5 years ago. Conducting and working with youth orchestras is one of her passions. She has conducted for the Young Artists Philharmonic, CT, Greater Erie Youth Orchestra and the Youth Orchestra of San Antonio. Donna continues to freelance and play chamber music throughout the United States. Donna is the creator of the Kodomo Music program for infants and toddlers and directs the Kodomo Music program at SMID.  She is also the Director of the DFWWOW Summer Institute. She is married to Jolyon, a cellist and has a 21 year old cellist son, Alexander.

Carl van Wyk provides the live music for Kodomo! Carl completed his B. Mus, M. Mus and Doctorate at the University of Cape Town, South Africa. He was awarded an Overseas scholarship from the South African Music Rights Organization’s (SAMRO) to study with British composer Alan Bush at the Royal Academy of Music in London. Carl van Wyk joined  the School of Music at the University of Witwatersrand, Johannesburg, South Africa. In 1991 he was appointed Head of the School of Music  and served in this capacity until 1996. He headed the Music Theory  and composition program until December 2000.Carl van Wyk has worked as Theory and Composition Teacher at the Suzuki Music Institute of Dallas since 2002. In addition to designing and implementing a music theory program for the Suzuki environment, he has also been  active in composing and arranging music for a variety of ensembles. His Little Dance for a little guy was an examination piece of the Associated Board of the Royal Schools of Music. His folk opera, Fiela’s Child, was premiered in September 1993 at the School of Music of the University of Witwatersrand, Johannesburg. His African Suite for Children’s Orchestra has proved very popular with audiences and performers and his Three Paraphrase for Two String Quartets, commissioned by SAMRO, was given its world premiere performance at the Oslo Chamber Music Festival in 1996 and subsequent performances at the Kennedy Center, Washington, D.C.